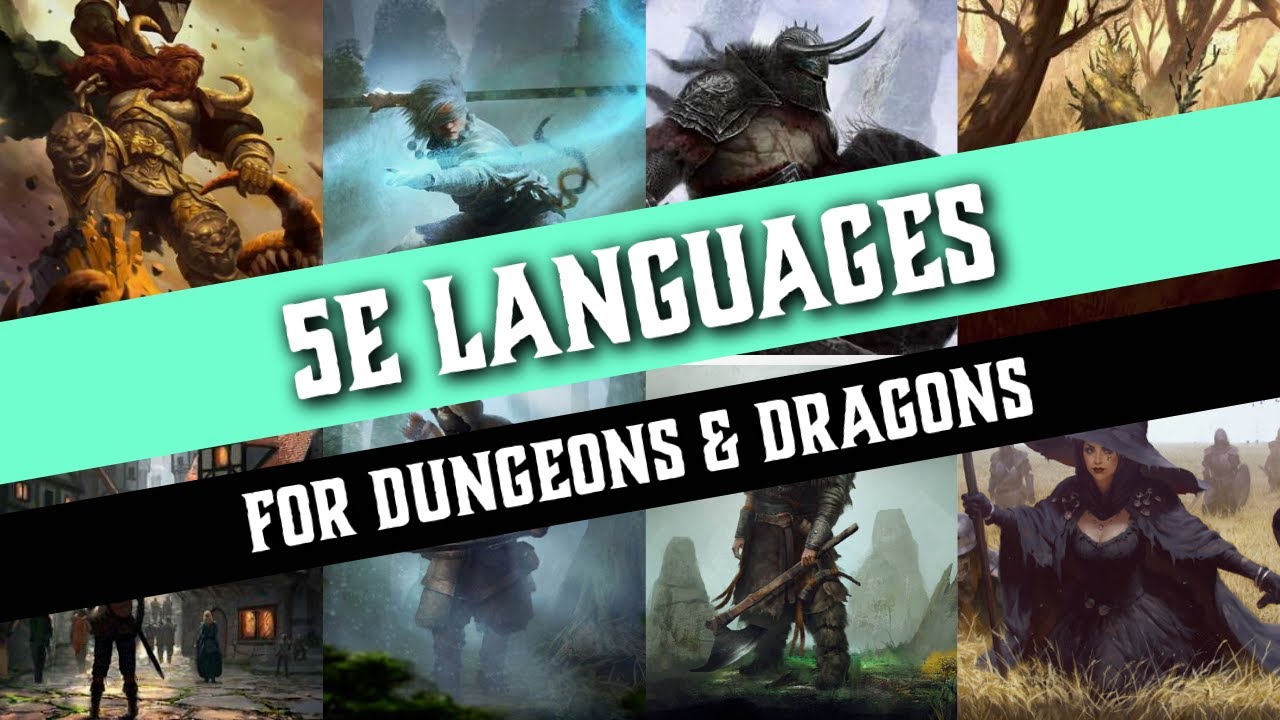 The Dungeons & Dragons languages have been a bit of a mystery from the time the game was first published in 1974. Players today have lots of resources available to them. Even though the game designers have given us some hints over the years, it’s still an area that is open to interpretation. So I thought I’d take a look at the Dungeons & Dragons languages to see how they stack up against each other in terms of how useful they are and how they can be used.

The Languages in Dungeons & Dragons

There are sixteen languages of Dungeons & Dragons. Names of these languages are mentioned here.

A portion of these languages has different dialects. For instance, Primordial has four unique dialects: Auran, Aquan, Ignan, and Terran. These languages can be generally understood by any speaker.

While making your new Dungeons & Dragons character, your first decision is to select the language they talk. Languages have a huge potential for fascinating and drawing interest in gameplay. Player characters (PCs) know at least two languages but languages are usually neglected. They’re ready to be utilized for flavor and mechanical perception by players.

The languages of Dungeons & Dragons include the standard ones that everyone speaks easily like common, elven, and draconic, as well as the ones that anyone learns through feats or training, like Deep Speech and Sylvan. As a Player Character, anyone starts off knowing two languages, but you can have as many as you like. When you start a new game, you get to pick two languages from the list of languages available to PCs. If you want to learn more languages you need to choose them through feats or training.

Why Knowing the Languages of Dungeons & Dragons and a bit of linguistics is important?

Many people play Dungeons & Dragons and other roleplaying games, but how many of them stop to think about why they need to know the languages of their characters. It’s an important part of the game since it helps your character in many situations. In order to survive, your character needs to understand the world around them. If they can speak the languages, they can learn about the culture and the people that inhabit the world.

Why knowing two languages of Dungeons & Dragons is essential?

When you sit down to create a new Dungeons and Dragons character, one of the first choices you make is which languages they speak. Actually, the real question is, how many languages do they know? The answer is simple, your character knows at least two languages. In fact, knowing more than two languages might be a better choice, depending on your game.

There are many good reasons why knowing two languages is essential for your game. The first one is that knowing two languages can help you solve puzzles, interact with Non-Playing Characters and avoid combat. It is a common situation when player characters need to talk with a local Non-Playing Character, who doesn’t speak the same language as them.

In such a situation, you can ask the Dungeon Master for a Speak with Animals spell and use it on a local animal. You can then use the animal as a translator. This is how you start using your animal companion as a translator, which is one of the most useful skills in the game.

What languages do the most popular fantasy races speak in the Dungeons & Dragons world?

In Dungeons & Dragons (D&D), there are all kinds of different fictional races to play as, from elves, dwarves, and halflings to orcs, goblins, and kobolds. And in the Dungeons & Dragons world, each of these races speaks their own unique language. If you’re playing a human, you can choose from the following languages: Common, Dwarvish, Elvish, Giant, Goblin, Orc, and under common.

You’ve just created your new Dungeons & Dragons character and now you’re looking at the list of languages they speak. There’s Dwarvish, Giant, Common, Elven, Gnoll, and so on. But which would be the best languages for your character to speak? The first thing you should do is go through the languages you speak and make sure they’re not there.

If you speak English, then you wouldn’t speak Elvish or Dwarvish. However, if you speak German, and your Dungeon Master is running a campaign in German, then you could speak Elvish, Dwarvish and Common, which you probably already know.

After you’ve taken care of this, you have a few more choices to make. You don’t want to overload your character with too many languages. Unless you’re playing a linguist or a bard, you probably won’t use the extra languages very often. You also don’t want to start with the languages your character is most likely to be around. If you’re playing a dwarf, you probably won’t be hanging out with a lot of orcs, trolls, and gnolls, so it is not very practical to speak their languages.

How do you know how many languages of Dungeons & Dragons to pick up during character creation?

Dungeons & Dragons is a game that has many, options, rules, and choices. The first choice that is made, when creating a new character, is which languages they speak. The player characters know at least two languages. The character can be a barbarian, rogue, druid, ranger, or wizard.

When creating a character, one of the first choices you make is which languages they speak. Most Dungeon Masters (DMs) will allow the players to choose two languages, and most characters will know at least two. Most commoners will only know one language, and it’s usually the language of their native country.

Because of the additional languages that your character speaks, there are a few considerations to make. First, it is important to know that there is no need to create them in detail when you create your character. You will be able to add more information about them later on when you are creating your character’s background.

The first step is to figure out how many languages your character knows. The languages that you can choose for your character are the following: Common, Dwarven, Elvish, Giant, Orc, Goblin, Gnoll, Halfling, Draconic, and Sylvan. You can choose either a language from the player’s handbook or a homebrew language.

Which languages do you need?

As a starting player, you receive two languages for free. Any additional languages are purchased with experience points. As a general rule of thumb, the languages you own should relate to the areas of your character’s life. Consider languages for any of the following reasons:

The list of languages that each character knows is often the first thing you choose when creating a new character. After all, languages are a key part of the Dungeons & Dragons experience. Even if you don’t have a translator Non-Player Character in the party, you’ll probably want to be able to understand what that dragon is saying to you. Since your character will be able to speak with almost anybody in your Dungeons & Dragons world, you should make that choice carefully.

If you have to translate everything to your character’s native tongue, it slows down the game. Don’t forget that there are plenty of options for languages you can pick from. It’s a good idea to keep that in mind.

What languages are there in D&D?

D&D has sixteen languages: Common, Dwarvish, Elvish, Giant, Gnomish, Goblin, Halfling, Orc, Abyssal, Celestial, Deep Speech, Draconic, Infernal, Primordial, Sylvan, and Undercommon. Some of these languages have multiple dialects.
For example, Primordial has four different dialects: Auran, Aquan, Ignan, and Terran. These dialects can all be understood by any speaker of the language.

How many languages are there in D&D?

There are 16 languages in D&D. Eight of these are standard languages and eight are exotic. Some of these languages are further separated into dialects. But these aren’t separate languages and speakers of the same language. You can understand each other even if their dialects are different.

What language should I choose for D&D?

It depends on the campaign! Standard languages like Elvish and Dwarvish are useful in most campaigns so they’re safe bets. The most useful language though will be the language of whichever creatures you encounter a lot.

This varies from campaign to campaign. So, if you’re not sure, ask your DM which languages they expect to be most useful.

What are the most common languages in D&D?

Exotic languages are rarer for players to encounter but their use is widespread within their spheres. For example, Sylvan is mostly spoken in the feywild but is very unusual to encounter elsewhere.