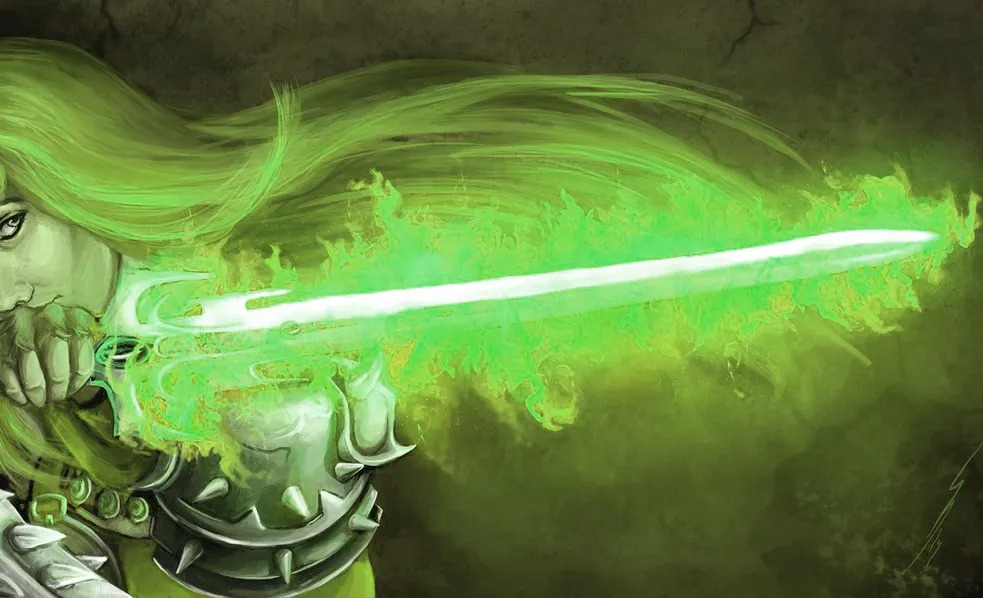 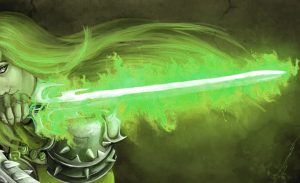 One of the tasks in a game that is often carried out by the wimpy Wizard is casting spells like Green Flame Blade 5e. Even Druids with their wooden or stone armor simply don’t have the same level of protection as their steel-clad counterparts. But sometimes the front line is ineffective at repelling attackers, or the monsters are cunning. They know how to target the robed humans casting fireball spells at them. When that happens and your very melee vulnerable spell casters are found in melee, then things might turn bad unless they have some way of fighting back. While some mages have D&D spells to help them disorient, evade, or defend themselves against attackers, wouldn’t it be great if a wizard could do some close combat damage?

Justin is a behind-the-scenes type of man who is infatuated with D&D and the game’s complete lore. He is here to share with us his years of playing experience.

With the spell “Green Flame Blade” they can fight back in melee, but how does this spell work? Why would you use it? And should you throw your Wizard on the enemy’s sword to use it effectively? Here’s our thorough Green Flame Blade 5e Guide.

The Green Flame Blade 5e is what?

In both Tasha’s Caldron of Everything and The Sword Coast Adventurers. The green flame blade is referred to be a cantrip and has the following stats:

You make a melee attack with the weapon you brandished to cast the spell against one creature within 5 feet of you. The weapon attack’s normal effects are applied to the target on a hit, and you have the option to cause green flames to leap from the target to a separate creature you can see within 5 feet of it. You deal fire damage to the second monster in proportion to your spellcasting ability modifier.

The melee attack’s fire damage increases to 1d8 + your spellcasting ability modifier for the second creature, and it adds an additional 1d8 fire damage to the target on a hit at level 5. At the 11th level (2d8 and 2d8) and the 17th level, both damage rolls rise by 1d8 (3d8 and 3d8).

Let’s start by explaining that it is a cantrip. This means that the spellcaster can use a melee weapon to perform the spell. They can cast as many times as they like as long as they have one. You require a somatic component and a melee weapon worth at least one silver piece, and the spell has a 5-foot radius so you can only cast it on those standing immediately next to you.

In other words, you can’t just pick up any stick and use it as a weapon. However, the majority of the weapons you may use and purchase in the game cost far more than one silver piece.

If you hit a target with your attack, you resolve the attack roll and damage as usual. If necessary, however, the weapon also spits out a torrent of green fire that can strike another target in the area. That extra fire damage is equal to your spellcasting modifier.

When you make a fire attack against an enemy, they both take an additional 1d8 fire damage at level 5, dealing 1d8 fire damage to the target. At the 11th and 17th levels, the damage for both attacks increases by 1d8.

When is the best time to use a green flame blade?

Except when multi-classing or when creating a class like a spell sword, most wizards and warlocks shouldn’t engage in melee combat. Nonetheless, if you find yourself outnumbered by attackers wielding melee weapons and assailants in close range, you can charge into battle with your weapon.

Even so, there are a couple of issues with using a Green Flame Blade as your go-to cantrip, but we’ll cover those in more detail later. Additionally, casters have access to a number of useful cantrips like Elderich Blast and Fire Bolt that let them deal significant damage while avoiding melee combat.

at a low level

It doesn’t actually deal a lot of damage to the target. To begin with, you must hit the target. Try something most wizards and warlocks won’t manage in melee unless they use specific perks. Strong druids might have the Shillelagh. This enables them to use their spellcasting power to attack rather than their physical strength. This can let them use their staff or club to attack close adversaries.

However, the fire leaps out at a creature that is five feet away from the target after you hit it with the melee weapon’s attack damage. The damage is only great at low levels, and having two enemies close to you at low levels isn’t the best. However, this might be good if you have two adversaries within melee range or within 5 feet of one another.

Should I Use a Finesse or Strength Weapon?

Of course, weapons that depend on the user’s strength are effective, but if you’re a caster with good dexterity, you can also utilize finesse weapons like rapiers and daggers. You can even use sneak attack damage if you use the spell and meet the sneak attack prerequisites.

The Wizard, Sorcerer, and Warlock can all cast this spell at level one without having to burn a feat. However, if the Magic Initiate Feat is chosen, any class, from barbarian to rogue, can use this spell. According to the Player’s Handbook, this achievement requires you to “choose a class: bard, cleric, druid, sorcerer, warlock, or wizard”.  You learn two cantrips of your choice from the spell list of that class. Choose one first-level spell from the same list to learn. You can cast the spell once at its lowest level with this feat. But you must finish a long rest before you can use it again.

If you can already cast at least one spell, you can choose a cantrip that requires an attack roll. So, depending on the class you choose, you will learn the cantrip from the same list as the Magic initiate and have the same spellcasting ability.

If you fire this feat and choose from the Sorcerer, Wizard, or Warlock cantrip trees, you can select Green Flame Blade and even Booming Blade, which can be a rather good combo if played correctly.

Combining it with the Booming Blade:

Some players enjoy using the spell Booming Blade in combination with the Green Flame Blade. Here are Booming Blade’s stats for you to compare.

You brandish the weapon you used to cast the spell and make a melee attack with it on one creature within 5 feet of you. When hit, the target suffers the standard effects of the weapon strike. Afterward, they become sheathed in booming energy until the start of your next turn. If the target moves 5 feet or more before then, the spell ends and the victim gets 1d8 thunder damage.

At a higher level:

The Booming Blade, like the Green Flame Blade, can be used to make an assault. If it hits, the target suffers ordinary melee damage as well as being sheathed in booming energy. If they move even 5 feet away from you, they take 1d8 thunder damage.

At higher levels, the 1d8 thunder damage increases, as does the extra damage from the thunder from the melee strike. It’s a good idea to keep both blade cantrips on hand in case you need them, especially if you’re stuck in combat and can’t rely on others to save you.

Of course, you may wonder why the opponent would move if it knew it would be subjected to the additional thunder damage. In that scenario, you must make it move. It can be quite intriguing to have party members that can cast ‘Lightning Lure,’ ‘Repelling Blast,’ ‘Moon Beam,’ or other attacks that can assist control the battlefield and how characters move on it.

How Do You Roleplay Green Flame Blade?

While casters can simply enchant their blade with magical fire because they have the power to do so, if you have the character take feats that allow them to use this ability, you will need to roleplay a little bit. Here are some suggestions if your players are the kind who enjoy role-playing games and become so adept at creating stories for everything they do:

First, it’s possible that the weapon itself draws energy from the character to lash out with flame rather than the player intentionally casting fire on it. You might give the player’s weapon a backstory. You can say that they have discovered a secret power and must discover its source, or perhaps you’ll take away their cantrip.

Give the effect a random trigger during combat by rolling the dice, adding to the magic surrounding both the spell and the weapon. Your players will be looking for the story or perhaps making one up around the weapon, which is always enjoyable and relieves your stress as the game master. Then, which is a lot of fun, you can let your players build the plot instead!

Should It Have a Blade?

In response, the spell’s requirements say that you need a weapon that costs one silver piece (sp) or more. This excludes improvised weapons and other objects that your characters may have picked up. You may have any melee weapon that your spellcaster is required to carry. It includes a Green Flame Dagger, Green Flame Axe, Green Flame Flail, or another weapon. They can be employing a weapon either for the benefit of their gods or as a result of their past.

You should be alright as long as the weapon is worth at least 1 sp. This is the case with most weapons. Booming blades are subject to the same limitations. In order to make the gameplay even more engaging, be sure to modify your weapons. If you feel like it, make them all genuine to your character.

Is Green color a requirement for a green flame blade?

Since the Green Flame Blade 5e is merely an energy burst for the appearance of your weapon, it can be any color you like. Perhaps your character has a particular fondness for the hues orange, blue, or gold! 9 out of 10 times, your DM will agree to let you alter your color if you talk to them.

The magical flame’s color of green was due to two factors. The first was the incorporation of the Acquisitions into D&D. Chris Perkins hosted a podcast where players would shout “Green Flame” anytime he mentioned the green fire. The community kept it all going.

The second reason is that in the same game, the green fire served as a warning to the players that something was magical nearby. It’s either the flame, the torches holding it, the vicinity around the fire, or something else altogether. They should look into it. After all, would you pass by a place where there were constant flames burning? Or would you pause to check out a green fire? The green fire is a lore-friendly technique to support the necessity for neon signs that guide the way to anything fascinating.  It is a requirement for most players.