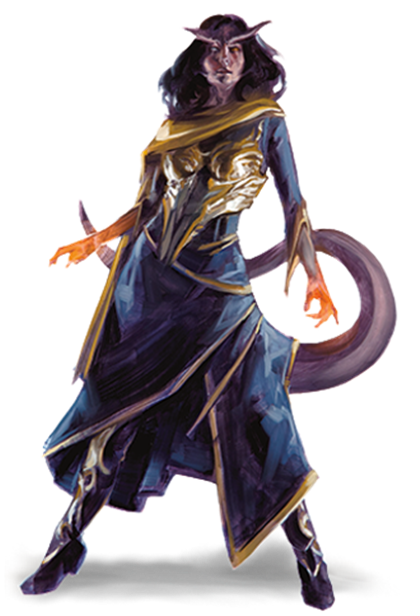 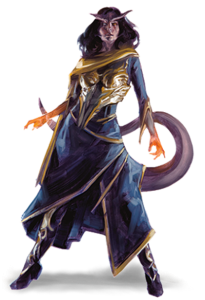 There are many aspects of being a Tiefling race details, such as being met with looks and murmurms, experiencing abuse and insults from strangers, and noticing mistrust and terror in everyone’s eyes. To add insult to injury, Tieflings are aware that this is the case because of a centuries-old contract that imbued their bloodline with Asmodeus’ essence, of the nine hells. Their looks and personalities are not a reflection of their flaws but rather the outcome of a long-ago sin for which they, as well as their offspring and the offspring of those offspring, will always be held responsible.

“However, you are aware of how others perceive you, Devil’s child”

The sudden severity in his speech startled her as those frigid as a winter storm, black eyes were staring straight into her heart.

Three is a bad number, she concluded. Do you think I have never heard that nonsense?

I am aware you have. It’s not as if I am plumbing the depths of your thoughts, darling girl, he said as she stared at him. Every tiefling carries the responsibility. Some people crumble under it, some make it their millstone, and some relish it. He tilted his head once more as he continued to inspect her with that menacing glitter in his eyes. You struggle against it right I bet it was a small wildcat, your claws get sharper with every insult and remark.

Three main categories can be used to group Tiefling names. Tieflings who are born into another culture generally have names that are representative of that culture. Some have names that indicate the demonic and history that are derived from the infernal language and have been passed down through the generations. Additionally, some young Tieflings who are looking for a place in the world take on names that represent virtues or other concepts and attempt to live up to those names. Choosing a name can be a noble endeavor for some. It’s a dismal fate for others.

Ignorant people frequently have a negative perception of tieflings because they believe that their infernal background has affected more than just a physical appearance, and has moral and ethical implications. The truth is that a tiefling’s pedigree has no bearing on its character. They choose their path in life despite having magic from the infernal regions as a gift.

What are Tieflings Race Details:

Descended from Demons and devils who had interbred with humans in the distant past. The
Tieflings are a race of humanoids. They have horns, tails, pointed teeth, and a variety of eye, and skin hues. Although they are not intrinsically wicked, they resemble the creatures of their forebears in appearance. Due to their origins tiefling are excellent thieves and robbers but they also make strong leaders and are ferociously devoted to their people.

Tieflings are a small minority, found largely in human cities and towns. They frequently live in the most impoverished areas of these communities, where they develop into con artists, robber lords, or other criminals. They sometimes reside in enclaves with other minorities where they are accorded greater respect.

Due to the fact that they lack a home, tieflings are aware that they must find a way in the world and develop the strength to survive. When a trifling’s companions show that they trust him or her, the tiefling learns to reciprocate their trust.  They are not born to do so when someone professes to be a buddy. A tiefling becomes a steadfast friend or ally for that person once they have shown them loyalty

Since they are descended from human bloodlines, Tieflings nevertheless appear to be human in the fullest sense. Their look, however, clearly bears the mark of their hellish ancestry. The huge horns on Tieflings can be crude like those on a ram, straight and tall like those on a   gazelle, or spiraling upwards like those on an antelope. They have thick tails that are four to five feet long. When they become agitated or anxious, lash or coil around their legs. Their eyes are solid colors —-black, red, white, silver, or gold with no discernible sclera or pupil, and their canine teeth are accurately pointed. In addition to the whole spectrum of human color, their skin tones also contain different degrees of red. The dark hair that cascades from behind the horns, which can range from black or brown to dark red blue, or purple is the norm.

Relationships with other races:

In general, Tieflings did not get along well with other races in the world and were reluctant to put their faith in people of any species. With regard to aasimar, Tieflings inherently hated and despised them. This hostility that they had for other people was carried to its utmost. It was difficult for people of any race to successfully communicate with Devas because they frequently had a similar response. Among all the common races, the half-orcs, who was also the object of disgust and hostility, were the group to which the tieflings felt the closest affinity.

Due to their infernal ancestry, tieflings have some racial characteristics in common.

Increase in the ability score:

Your charisma and intelligence scores both rise by one point each.

Tieflings live a few more years than humans but develop at the same rate.

In terms of height and physique, Tieflings are similar to humans. You are a medium size.

You see better in the dark and the dull because of your diabolical heritage. Within 60 feet of you, you can see in low light as if it were brilliant, and in complete darkness as if it were low light. In the dark, only grayscale shades may be seen.

Damage from fire won’t harm you

The thaumaturgy cantrip is something you are familiar with. With this trait, you can cast the hellish rebuke spell as a 2nd-level spell once you reach the Third Level. You can do so again after a long rest. With this characteristic, you can cast the darkness once when you reach level 5, and you can do it again after a long rest. Your spellcasting talent for these spells is charisma.

You are able to communicate in common and infernal ways through speech, reading, and writing