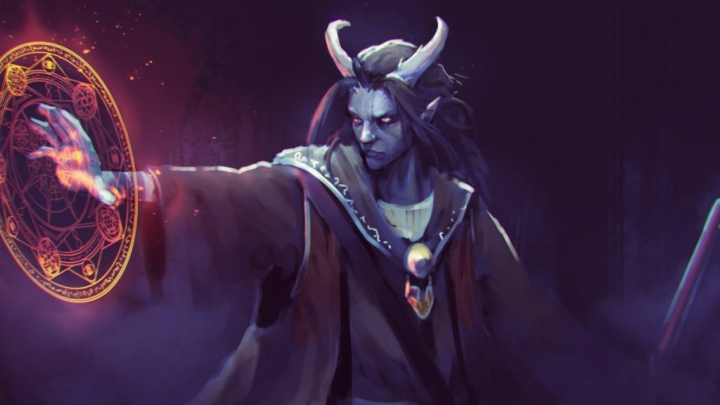 In the D&D universe, there are numerous spells like Witch Bolt 5e in addition to all the fan-made content. It is a 1st level evocation spell. Spells like Witch Bolt 5e last for a few rounds. They even have the ability to hit multiple targets. In contrast to the majority of spells, they typically deal their damage before adding an effect or simply ceasing to function. One such spell that has a lot to offer the battlefield is Witch Bolt. But how do you use this unique witch bolt spell? When should you use it? And how do you make it useful whenever the battle heats up? You’ll find all that out with our Witch Bolt 5e Guide. 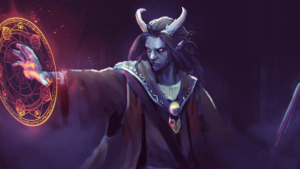 Justin is a behind-the-scenes type of person who is devoted to D&D and the game’s entire lore. He is here to share his years of playing experience with all of us.

What Exactly Is The Witch Bolt?

The following are the witch bolt stats, as found in the Player’s Handbook:

A sustained arc of lightning forms between you and the target as a beam of crackling. Blue energy lances out toward a nearby target. Make a spell attack from a distance on that opponent.

The target takes 1d12 lightning damage on a hit, and for the duration. You can use your action to automatically deal 1d12 lightning damage to the target on each of your turns. If you use your action to carry out any other task, the spell expires. The spell also expires if the target ever moves outside of its area. The effect or gains complete cover from you.

The initial damage of this spell increases by 1d12 for each level of spell slot above the first when it is cast using a spell slot of second level or higher.

Analyze this spell in detail:

Witch Bolt 5e can be used by a sorcerer, warlock, or wizard and is an evocation spell of level 1. It has a 30-foot range and will be discussed further along with its vocal, somatic, and material components. Witch Bolt is a concentration spell as well, and its duration is also one minute or if the concentration is not broken, ten rounds of combat.

Before the lightning strikes the target, a beam of blue energy is directed toward a nearby creature. Consider the Star Wars force lightning. You must launch a ranged spell attack, and if it succeeds, the target will be struck for 1d12 lightning damage.

Now, you can use an action once per turn (up to 10 rounds) to send more energy down the arc. You can zap the target with an additional 1d12 lightning strike damage. The spell expires if you move or engage in any other activity. The game also ends if the target moves outside of the 30-foot zone or ducks into complete cover.

The spell’s initial 1d12 damage increases by a d12 for each additional spell slot when it is upcast. It’s crucial to note that the 1d12 damage that is done over time is not included in this damage; only the initial damage is. Whatever happens, that remains at 1d12.

If you use this level 1 spell properly, it has some decent power and has the potential to be awesome. The witch bolt creates an energy lance that ties you and your target together. If your ranged attack roll connects, it can cause 1d12 lightning damage. If the target is still alive when you send that 1d12 down the chain, you can keep doing so until you take another action.

When casting Witch Bolt, you could potentially deal damage equal to one die’s worth of damage using the 1d12 to its full potential. All but the deadliest enemies will be quickly reduced to ash by that sizable spread of damage, and even if they aren’t completely eliminated, they will have sustained enough damage that others can easily finish them off.

Use this on larger adversaries who have already been pinned down by your heavy hitters to keep them from moving around too much. You can then continue dealing damage down the lance for as long as you like. However, there are a few drawbacks to the spell that prospective users should be aware of.

The Downsides of Witch Bolt:

You must first launch a ranged attack to determine if your attack hits its target. If the spell fails due to the enemy’s high AC, you have wasted a first-level spell slot. Furthermore, there are numerous ways the spell could fail, even if you tether your opponent after the first blow. The spell expires if the adversary steps into the complete cover or moves more than 30 feet away from you.

The spell expires if you use your action to carry out anything other than dealing another 1d12 point of damage to the adversary. You can move, but you cannot attack, cast another spell, assist, dash, or do anything else while the enemy is within 30 feet of you. In essence, you’ve bound yourself and your target together for the duration of the spell.

Finally, even though the spell’s initial damage increases if you upcast it, the damage over time is still listed at 1d12. Even against enemies who can resist lightning, every bit of damage can help, so the spell is still useful, but by the time you reach a higher level, you’ll probably have better options.

Although the damage output is excellent and the spell itself isn’t bad, its limitations make it less effective. Witch Bolt is still a useful spell in any player’s arsenal for the early game.

You must keep your enemies still. Because you don’t want them to simply scamper their 30 feet of available movement and out of your line of sight. The ideal tag-team spell with a fellow spellcaster is to use the “Hold Person” spell to paralyze a target for up to a minute. Of course, a hold person only works on humanoids, but enough monsters match that description that it functions 80% of the time.

The enemy can be knocked prone by your fighter. If they can manage to stand up, they will have to move only halfway. That may cause them to pause so you can close the distance between you and them again. If your tanks haven’t charged into the fray and aren’t keeping the large monster busy, keeping enemies still can seem a little gimmicky. Nevertheless, it can be effective.

When casting a witch bolt 5e, is movement permitted?

This one is a bit confusing because the rules for Witch Bolt say: The spell ends if you use your action to do anything else. Now, in most cases, things like swinging your sword to hit someone, drinking a potion, and using an ability can all cost actions. However, what about bonus actions, reactions, and movement?

Well, that depends on your DM and their set of house rules, but for the majority of players, reactions are not regarded as actions. You can respond to other triggers, make a melee attack of opportunity, and uncanny dodge an attack. Additionally, bonus actions are regarded as bonus actions in situations where they don’t count as actions.

Unless you use both of your actions to dash, movement usually doesn’t count as an action. As long as you stay within 30 feet of the target, you are fine moving in any other case. But if you do anything else, the spell is over.

Witch Bolt is an excellent spell that is constrained in some ways. For their spells to make more sense in the game world, fit a character’s archetype better, or just be more entertaining without being overpowering, some DMs and players like to create their own spells. Beginning with the idea that you are linked to your target by an energy beam, Witch Bolt homebrew concentrates on this idea.

Some players will even cast the spell into the water, shocking any enemies nearby and causing environmental harm.

The Witch Bolt deals 1d12 lightning damage to anyone who comes in contact with a line drawn on the physical battle map by some DMs. The line between the caster and they’re intended is the target. Fighting may become even more difficult as a result of everyone having to deal with a natural hazard, especially in enclosed areas where space for movement was already restricted.

If your spellcaster needs to take the movement of the party into account, it can also help make repeated dungeon crawls less of a chore to go through. As you map out the strategy for each room’s attack, that may lead to some very intriguing tactics and alliances.

Even while you might be tempted to use the Witch Bolt on the biggest and most terrifying enemy on the battlefield and hope that they have no immunity to lightning, it can be useful to do some preparatory study. According to the monster guides that were provided for the game, only 35 opponents are resistant to lightning, and 10 are completely immune to it. Lightning damage cannot harm any monsters.

You won’t need to worry unless you are up against a Djinni, Behir, Bronze Dragon, Ochre Jelly, Will-O-Wisp, Blue Dragon, Black Pudding, Flesh Golem, Shambling Mound, Storm Giant, or a Kraken. Lightning damage cannot harm any of the enemies on the list. The majority of them, however, are also fierce foes with high CR. The random encounter you have today won’t lead you to a Black Pudding nest or Bronze Dragon lair.

Apart from that, some enemies may be resistant to your attacks, but your Witch’s Bolt will generally deal the required amount of damage. Additionally, your game master (DM) may include additional homegrown or third-party creatures that are lightning-vulnerable, in which case you should light them up!

You could think of it as blue energy beams that become more painful over time as you continue to feed it more energy, similar to force lightning. The character of your caster really makes a difference. For instance, a wizard who reveres the god of death could direct decaying energy at the target, making it wither and perish.

When a warlock summons their patron, the lightning may be colored in the hue of their deity. It may have additional effects such as sounds or visuals may be added to truly frighten the target. Finally, you might have the attacker uses one hand initially. If they want to hit the target with more force, they can switch to using two hands.

It’s a cool spell period, not just cool spell damage, so have fun with it. Since there are so many better options available that you won’t be using it a lot in the later game.

3.    Should I reserve Witch Bolt 5e for crucial battles?

It is incredible how many spellcasters manage to win battles using only cantrips and good fortune up until the long rest period begins. While that does work, you should still use your spell slots in order to avoid wasting them. In the case of Witch’s Bolt, you should reserve it for significant battles. Like; against the powerful brutes, your DM sends your way.

For you and your party, the significant damage can be extremely beneficial. Combine it with a few fighters or spells to prevent a creature from escaping the area of effect. The Mimic or the large gnoll boss you’ve discovered at the end of the dungeon are your enemies. They’re likely not the type of enemies you want to be trading blows with. While everyone is bloodied and short on supplies. The odds can be balanced if the Witch’s Bolt Spell is successful. It’s a big if and can ensure that combat goes in your favor so you can rest for a while.