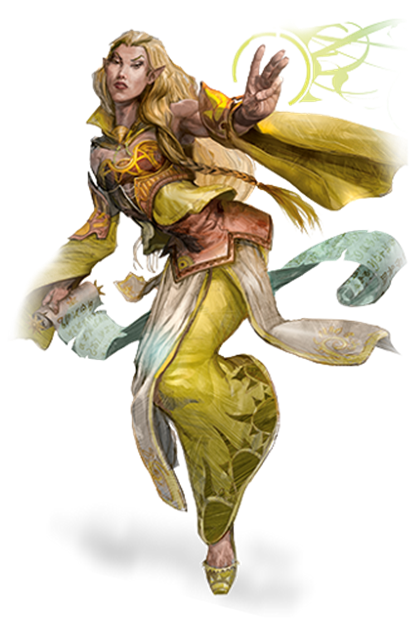 The elf is a magical race with otherworldly grace who exist in the world but are not fully a part of it. Elf resides in settings of ethereal beauty, such as the midst of ancient forests or in silvery spires glittering with faerie light, where soft music floats through the air and delicate scents drift on the breeze. Elves are passionate about the natural world, magic, creativity, music, poetry, and other wonderful things.

Goldmoon said softly, “I had no idea such beauty existed. Even though the march had been challenging, the payoff at the end had exceeded their wildest expectations. In front of the legendary city of Qualinost, the companions were perched on a high cliff.

With their brilliant white stone marbled with gleaming silver, the city’s four slender spires rose from the city’s corners like glistening spindles. The sky was filled with graceful arches that swooped from spire to spire. They were made by ancient dwarven metalworkers, and despite their appearance, they were so delicate that a bird lighting on them might tip the balance. They could support the weight of an army. There was no wall around Qualinost, just these gleaming arches as the city’s only boundaries. The wilderness was welcomed with open arms by the elven city.

Elves have a grace and beauty that humans and people of many other races find hauntingly beautiful. Their heights, which range from well below 5 feet to just over 6 feet, are slightly shorter than those of humans on average. Because they weigh only 100 to 145 pounds, they are lighter than humans. The height of men and women is roughly the same, and men are only slightly heavier than women.

Elves have skin tones that range from those of humans to almost bluish-white, bronze, and copper. They also have hair that is green or blue and eyes that resemble pools of liquid gold or silver. Elves’ hair is a variety of colors. The body and facial hair of elves are sparse. They prefer fashionable attire in bold hues, and they adore delicate but simple jewelry.

Elves have a lifespan of well over 700 years, giving them a long view of situations that might trouble races with shorter lifespans more intensely. They are more likely to be amused than excited and curious than greedy. They often maintain their distance and are unaffected by trivial events. But elves can be determined and persistent when they are pursuing a goal, whether they are adventuring on a mission or mastering a new skill or art. They take a while to form allies and foes, and even longer to forget them. They respond angrily to minor insults and vengefully to serious ones.

Elves are adaptable in the face of peril, like the young branches of a tree. They put their faith in diplomacy and make concessions to settle disputes before they turn violent. When people try to enter their homes in the woods, they have been known to flee, sure that they can just wait for them to leave. But when the situation calls for it, elves show a stern martial side, showcasing skill with a sword and a bow as well as cunning.

The majority of elves live in tiny villages hidden among the trees in forests. Elves don’t need to clear and plow the land to feed themselves because they can hunt game, gather food, and grow vegetables thanks to their skill and magic. They are skilled artisans who produce exquisitely crafted apparel and works of art. Although few elves interact with outsiders, those who do can earn a living by exchanging their handmade goods for metals (which they have no interest in mining).

When elves are found outside of their own countries, they are frequently traveling minstrels, artists, or sages. To hire elf teachers to instruct their children in magic or swordplay, human nobles engage in competition.

The pursuit of adventure:

A wanderlust drives elves to embark on adventures. They can enjoy centuries of exploration and discovery because of their long lifespan. They seek careers that allow them to travel freely and choose their own pace because they dislike the regimented daily pace of human society, which is constantly changing over decades. Elves like to go on adventures because it gives them the chance to practice their fighting skills or develop their magic. Some may decide to fight alongside rebels who are opposing oppression, while others may decide to support moral causes.

Even though they tend to be haughty, elves generally show grace toward those who fall short of their high standards, which is the majority of non-elves. Nevertheless, they can see the good in almost everyone.

Dwarves: “Dwarves are dreary, awkward oafs. But what they lack in humor, sophistication, and manners, they make up in valor. And I have to admit, the work of their best smiths is on par with that of elves.

Halflings: Halflings are people who enjoy simple pleasures, and that trait should not be mocked. They are kind people who look out for one another and take good care of their gardens, and they have shown when necessary that they are tougher than they appear to be.

Humans: Human endeavors can sometimes seem so pointless because of all the haste, ambition, and drive people to have to accomplish something before their short lives end. But when you consider all that they have accomplished, you can’t help but admire them. If only they would take it more slowly and refine their movements.

Elves are given child names before this time because they are considered children until they declare themselves adults, which usually happens after their 100th birthday.

The name an elf chooses for themselves as adults are different from the name they used as children, though those who knew them as children may still refer to them by the child name. The names of respected people or other family members may be reflected in each adult elf’s unique name, which is created just for them. There isn’t much difference between male and female names; these groupings only show trends at the general level. Every elf also has a family name, which is typically a compound word that is related to an Elvish word. To communicate with humans, some elves change their family names from Elvish to Common, while others keep the Elvish version.

Subraces of The Elf:

Three main elven subraces—the high elves, wood elves, and dark elves, also known as drow—were created as a result of ancient divisions among the elven people. Select either one of the two subraces from the sources listed below or another one. You can select a more specific subrace if you prefer because in some worlds (like the Forgotten Realms’ sun elves and moon elves), these subraces are further subdivided.

A variety of natural skills are inherent to your elf character as a result of thousands of years of elven development.

Even though elves mature physically around the same time as humans do, the elven definition of adulthood goes beyond physical development to include life experience. An elf can live up to 750 years old and typically claims adulthood and a name around the age of 100.

Elves have slender builds and can range in height from under five to over six feet. You are a medium size.

You have excellent vision in low light because you are used to twilight forests and the night sky. Within 60 feet of you, you can see in low light as if it were bright, and in complete darkness as if it were low light. In the dark, only grayscale shades can be seen.

The skill of perception is one in which you excel.

Magic cannot put you to sleep, and you have an advantage on saving throws against being charmed.

Elves don’t require rest. Instead, they spend four hours a day engaging in intense meditation while they are still dreamless. (A common term for this type of meditation is “trance.”) In a way, you can dream while you’re meditating; these dreams are actually mental exercises that you’ve been doing for years and have become automatic. You get the same benefit from resting in this way as a person would after sleeping for eight hours.

Elvish and Common are both languages you can read, write, and speak. The grammar in elven is complex and the intonation is subtle. The literature of the elves is diverse and rich, and other races are familiar with the elves’ songs and poetry. To include Elvish ballads in their repertoires, many bards pick up their language.

This version of the eladrin was first used as a model for making your subraces in the Dungeon Master’s Guide.

Eladrin is a magical being with a close connection to nature who dwell in the Feywild’s twilight realm. Their cities occasionally leave the Feywild and appear briefly in deep forest glades or mountain valleys before dissipating back into the Material Plane.

Your intelligence rating rises by one.

Your skills with the longsword, shortsword, shortbow, and longbow are proficient.

This trait allows you to perform a single misty step spell. When you have finished a short or long rest, you regain the capacity to do so.

You have a sharp mind and a command of at least the fundamentals of magic, being a high elf. There are two different types of high elves in many of the D&D universes. The Silvanesti of Dragonlance, the sun elves of the Forgotten Realms, the gray elves and valley elves of Greyhawk, as well as the haughty and reclusive sun elves, are examples of this type. They also belong to this type. The other types, such as the moon elves of the Forgotten Realms, the Qualinesti of Dragonlance, and the high elves of Greyhawk, are more prevalent, friendlier, and frequently encountered by people of other races.

The Faerûn sun elves, also known as gold elves or sunrise elves, have bronze skin and hair that is either golden blond, copper, or black. They have golden, silver, or dark eyes. Moon elves, also known as silver elves or gray elves, are much paler and occasionally have blue tints to their alabaster skin. They frequently have hair that is silver-white, black, or blue, though they can also have blond, brown, or red hair in a variety of tones. They have blue or green eyes with gold flecks.

You gain one point to your intelligence score.

You are skilled in using the longbow, shortbow, longbow, and longsword.

You are familiar with one wizard spell of your choice. Your spell-casting capacity for it is intelligence.

You are a candidate who speaks one additional language of your choice.

You have keen senses and intuition, and as a wood elf, you can move quickly and covertly through your native forests thanks to your quick feet. These are the races known as wood elves in Greyhawk and the Forgotten Realms, as well as the wild elves (grugach) of Greyhawk and the Kagonesti of Dragonlance. Wood elves, also known as wild elves, green elves, or forest elves in Faerûn, are solitary and wary of outsiders.

The skin tone of wood elves is typically coppery, occasionally tinged with green. They typically have brown or black hair, but it can also occasionally be blond or copper in color. They have hazel, brown, or green eyes.

Your Wisdom rating rises by one.

Training in Elf Weapons You are skilled with the longsword, shortsword, longbow, and shortbow.

Even if you are only partially hidden by vegetation, a downpour, snowfall, mist, or another natural phenomenon, you can still make an effort to conceal yourself.