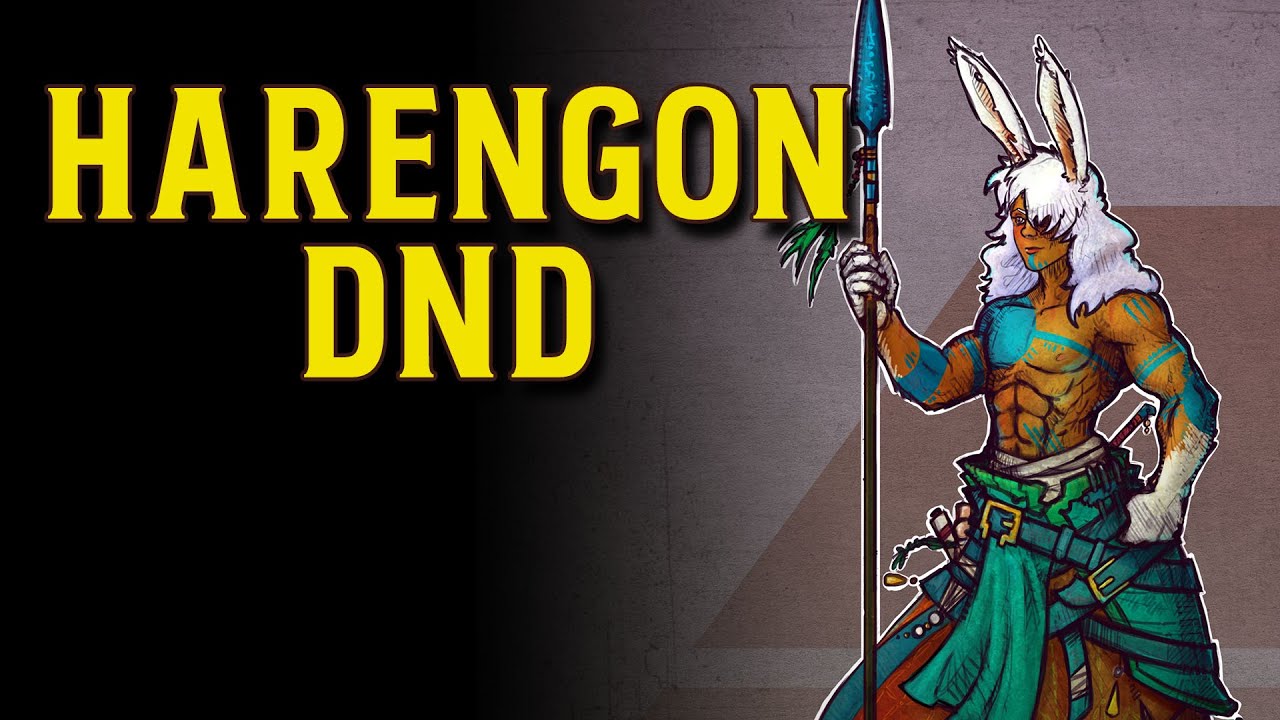 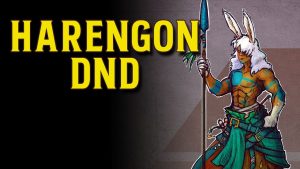 The harengon dnd 5e is an anthropomorphic Rabbit race that debuted in the wild beyond in the witchlight. They are a relatively recent addition to  Dungeons and Dragons 5e. They may have been permanently altered by their time spent confined there. Harengon dnd 5e is bipedal humanoid character with a feel of a rabbit.

Harengon is a tirelessly eager traveler who frequently travels far and wide across the multiverse. But they are never entirely free from the feywild’s influence, for better or for worse.  these nimble, fortunate, and humorous people are always on the go.

Thank you for visiting our page on the fascinating new playable race known as the Harengon in DND 5E.

We will examine harengon’s culture, abilities, and potential class compatibility as well as everything else we know about them in this article.

What do harengon dnd 5e mean?

Bipedal humanoids known as harengon have long feet that resemble those of a rabbit as well as heads, and legs.

Even though they are considered to be fey themselves, they endorse the enthusiasm, and temperament of their leoprine relatives as well as a hint of magic from their time spent in the feywild.

Making of the harengon dnd 5e:

There are no longer any specific Ability score bonuses( and occasionally penalties)  related to playing a particular race in DND 5E. This is because the character is and has moved towards a line model.

As a result,  you have the option of giving a harengon character’s ability scores a + 2 and a + 1 boost, or three + 1 boosts.

You can also communicate in common and one other language that has been approved by the DM. You can read,  write and understand it as well.

In contrast, a harengon who was born and raised on the material plane or somewhere else in the multiverse could speak any language. Mostly they are appropriate for your character’s background and the campaign you are currently playing.

The following traits apply to harengon:

It is immediately clear that Harengon possesses both some seriously strong and some merely passable traits.

Hare-trigger and Leporine senses are excellent, to start. For years, Rogues and rangers have favored elves as a strong racial voice, in large part due to their free perception proficiency.

It’s possible that perception is the most important skill in Dnd 5e, even more so than stealth persuasion.

The best way to learn more about the world is through perception (aside from simply asking intelligent questions, of course). Also pretty much any player character regardless of class can gain from having a high perception proficiency.  This is because you can not act against Enemies you cannot see or solve a problem you are unaware of.

Additionally, There is no restriction on how often you can use lucky footwork (Other than once per turn). Throughout a campaign, it really could end up saving your life at least once. Lucky footwork won’t save your skin every time you fail a Dexterity saving throw, but it will occasionally do so.

Finally,  while jumping is undoubtedly a niche benefit, rabbit hop feels to me like a better iteration of Satyr’s leap. It also feels like a nice thematic addition to Harengon’s skill set.

When considered as a whole, the harengon’s collection of characteristics creates a flexible and resilient player race that could be a great fit for any class that prioritizes dexterous mobility, such as the Monk or Rogue, or wisdom, such as Druid or ranger, but should make a strong foundation for just about any class.

Which class is best to play with a Harengon?

The idea of the ideal pairing of character class, and race has kind of vanished now that the harengon (along with all the other player races in Monsters of the multiverse) is based on the lineage system.

Therefore, the most straightforward response to the question “Which class should my harengon character be?” is, any class you want.

The harengon’s racial characteristics, however, can work to push the choice in a few directions if you still want to approach it from a mechanical perspective, including one synergy that’s almost too good to pass up.

The Assassin Rogue, in many ways, distills the essential qualities of the rogue class to a fine (poisoned needle) point while remaining silent, lethal, and a knife in the dark they won’t see coming.

When you take on the role of an assassin, your keystone Assassinate ability activates at the third level and guarantees that you have the upper hand in any attacks launched at a creature that hasn’t engaged in combat yet that turn.

This ensures that not only will you be able to use your sneak-attack damage. They also that any successful attack you make against an enemy who is caught off guard will result in a critical hit.

This implies that for an assassin, getting off the most damaged possible requires being first in the initiative order. As a result, the subclass is a perfect match for the Hare trigger trait of harengon.

The synergy between the Rogue’s Evasion ability, which prevents damage from AoE attacks that would otherwise deal half damage on a successful Dexterity saving throw, and Lucky footwork is also excellent even if the assassin isn’t to your taste. This is because a low-hp rogue’s Dexterity saving throw matters much more.

Beyond the Assassin Rogue, a Harengon character can choose from a wide variety of intriguing mechanical and roleplaying options.

A  huge advantage for spellcasters is  Harengon’s bonus to initiative rolls. Because it’s crucial to be able to cast defensive buffs, area-of-effect, control spells, and other magical abilities.

Playing the part of a Harengon’s:  Origins, culture, and behavior

We don’t have a lot of information to draw from when it comes to role-playing a Harengon and its culture in DND 5E.

the majority of the player races that are ” added” are revivals from previous editions. Or they are covertly inspired by other characters or settings.

Contrarily, Harengons are an entirely new creation that made their debut in the Wild beyond the witchlight. To be honest, they don’t get that much of a chance to develop.

Knowing that Harengons are not fey, We also know that they have their roots in the Feyland. However, they have many traits common to fey and other creatures found in the feywild.

Each Harengon consistently seems to be full of energy. They are like a wound-up spring, and they have decidedly rabbit-like temperaments. Harengon is exuberant and enjoyed traveling wherever their fleeting fancy takes them.

Furthermore, we are formally informed that their Good fortune (unlike that of the halflings)  is directly related to their association with the Feywild.

Although it is explicitly stated anywhere,  it makes sense to assume that the ancestors of the Harengons the word common and ordinary rabbits. Who unintentionally wandered into the feywild rather than humanoids of fairies. (or perhaps we were brought back as pets by visiting Fey).

These rabbits from the material plane can gradually start to be infected by the erratic all-pervasive Magical energy of the Feywild over time.  we are talking about many, many generations, and eventually, they changed into the bipedal humanoid race known as  Harengon.

There is some precedent for this since it is believed that a similar process affected Dragons who laid their eggs in the feyland, giving birth to Moonstone Dragons.

Naturally, There are a variety of other ways in which completely new species can arise in the  Feywild.

From wild magic surges that transformed a large group of individuals into human-rabbit hybrids,  magically altered hundreds of rabbits. There are endless possibilities.

Act with vigor. Harengons are always poised on the edge of a choice between fight or flight, running away, or dancing. Whatever you are about to do, they’re going to do it right away.

In terms of appearance, Harengon captures the entire range of fur hues, Lengths,  and markings present in actual rabbits.

rather you are looking at officially recognized breed coloration or not,  there is a huge variety of rabbits available.  feel free to experiment with how your Harengon looks down to the length of their ears, fur, and the shape of their faces.

The pursuit of freedom drives the Harengon,  the concept of being constrained or deferring to authority is repugnant. Especially if it restricts their mobility.

A Harengon’s Ideal family is another factor that should not be overlooked.

Large litters of newborn rabbits are raised in even larger warrens. They are made up of a crowded, teeny-tiny network of burrows.

Harengon could form close-knit family ties, have a vast network of friends, and have relations constantly making demands of them. But they will prefer to live in small spaces.

Additionally, Harengon’s behavior will unavoidably have been shaped by having to coexist with the Feywild’s other inhabitants as a result of being its resident.

In the Feywild, there are a lot of rules and laws. These include ones that control the power of one’s through name as well as that governing reciprocity and hospitality.

Although the harengon is a native of the Feywild, we are unaware of any official rules regarding their names.  However, we do know that most of them will have two names.

A harengon who wants to avoid being forced into servitude by powerful fey and other entities will probably choose a nickname for themselves. This will keep their true names well hidden.  A true name has great power in the faerie realm.

A few Harengons may decide to add “Mr or Mrs” to their nickname to give it a more formal air. They can use another title for honorific( like dr., sir, etc)

In the Sylvan language, which has many similarities to Elvish, a Harengon’s true name is probably written. You might even give your Harengon and elvish true name given that the majority of Fey have elvish names.